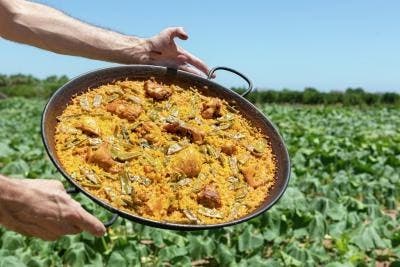 IT wasn’t quite what I wanted to hear as I prepared to have a go at cooking Spain’s signature dish “The first time you cook a paella, you never get it right.”

Yet this novice cook needed to try; I was in Valencia, after all, the home of paella.

Even before we started, it was daunting I was staring into a roaring open fire with the sun beating down on my back and the heat was exhausting.

I joked to my  teacher Vicente Rioja, a paella cook renowned across Spain,  that I normally  struggled to boil an egg. He did not smile.

Things, I felt, could only get better.

The classic dish, so popular with tourists, usually features a mixture of seafood and meat, but that is not the paella Valenciana. This one uses meat and vegetables.

“Paella is all about getting the tastes of the food absorbed into the rice,”  explained Rioja.

Rice is absorbent and acts as a “conductor” of all the tastes of the mix of meats and vegetables. So when you sit down to eat the paella, it is the taste of the rice which determines whether you have really cracked it.

I placed chunks of chicken and rabbit liver on the heat, nudging them until they were golden. Next came the pureed tomatoes, white beans, green beans and pepper, followed by water.

“Timing is the essence, let’s leave it for about ten minutes,” said Rioja.  “Time for a drink and an aperitif of rabbit livers.”

In this part of southeastern Spain, rabbit livers, full of vitamins and iron,  are regarded as scraps to keep children full until the main dish arrives.

It did not have the desired effect on my children, who gingerly tasted the richtasting rabbit meat. Icecold white wine was not an option for them.

Returning to the cooking, we heaped the rice into our dishes and spread the meat to the edges to leave it to simmer for 18 minutes – no more.

Finished! It looked easy, but of course it was far from straight forward.

And now for the fun bit. Serving my creation to my wife, our elevenyearold twins and our eldest, a temperamental teenager. Normally, they all moan at my less than perfect cooking.This time they had nothing but compliments.

We were gathered in the outdoor restaurant of Rioja’s familyrun hotel, Hotel Rioja.  Located in Benisanó, a small town north of the city, Rioja is the head chef here and it has become a mecca for chefs from across Spain who come to sample his work.

The region is famous for paella due to its lush green rice fields which cover the deltas of the city’s two main rivers, the Turia and Júcar. Valencia produces 120 million tonnes of the ‘white gold’ as it is called, every year.

A ten minute drive (or bus ride)  south from the city takes you to the Albufera Natural Park, a huge lagoon, which mixes fresh and sea water and supplies the paddy fields around. Here we took a flat bottomed barge with a guide out on its calm, green waters.

Cruising through the reeds, we  saw cormorants and ducks divebombing fish.

During the cruise, Santos Ruíz, the president of the Denomination of Origin of Valencian Rice explained to us it was the Arabs, who ruled the Iberian peninsula until the 8th century, who first introduced rice to Spain.

After the Christian reconquest of Spain in the 13th century, rice was banned at various times because it was believed that it spread malaria, due to the fact that it  grew in damp areas populated by mosquitos. It was not until the 18th century that this theory was disproved.

You can also sign up for paella making at https//paellaschoolmontero.com/. They take you out on a boat on Albufera Natural Park.